Red Dead Redemption has been called, quite rightly, an “outlaw simulator”. It’s a game that…yes, sure, is about shooting things. And yep, you get into punch-ups. And sure, there’s plenty of riding around on that pony and exploring the environment and heck, just taking in the views. But it’s so much more, too, from the shootouts down to the subject of this article – the poker.

The care you put in to simply caring for your horse, for example, is unprecedented (outside of My Riding Stables: Life With Horses anyway. Or so we hear…). You need to feed it, clean it, balance its stats, give it an occasional pat and a cuddle… the list goes on. And how you treat your horse reflects back at you through the rest of the game – take good care of it and it will look after you. Punch it too often and it might get skittish and bolt in a fight.

All of which is a long-winded way of saying that Red Dead Redemption 2 is a game with a crazy level of depth. Way more than it needs. Every nook and cranny has a story of its own and gameplay opportunities for you to explore.

One of the best examples of this: poker. Frankly, we’d probably pay 10 bucks for the poker all by itself. (Yes, sure, it would be a little bit nuts for a developer to invest all that money into character models, voice work and animation into a game that only does poker, but you take our point). 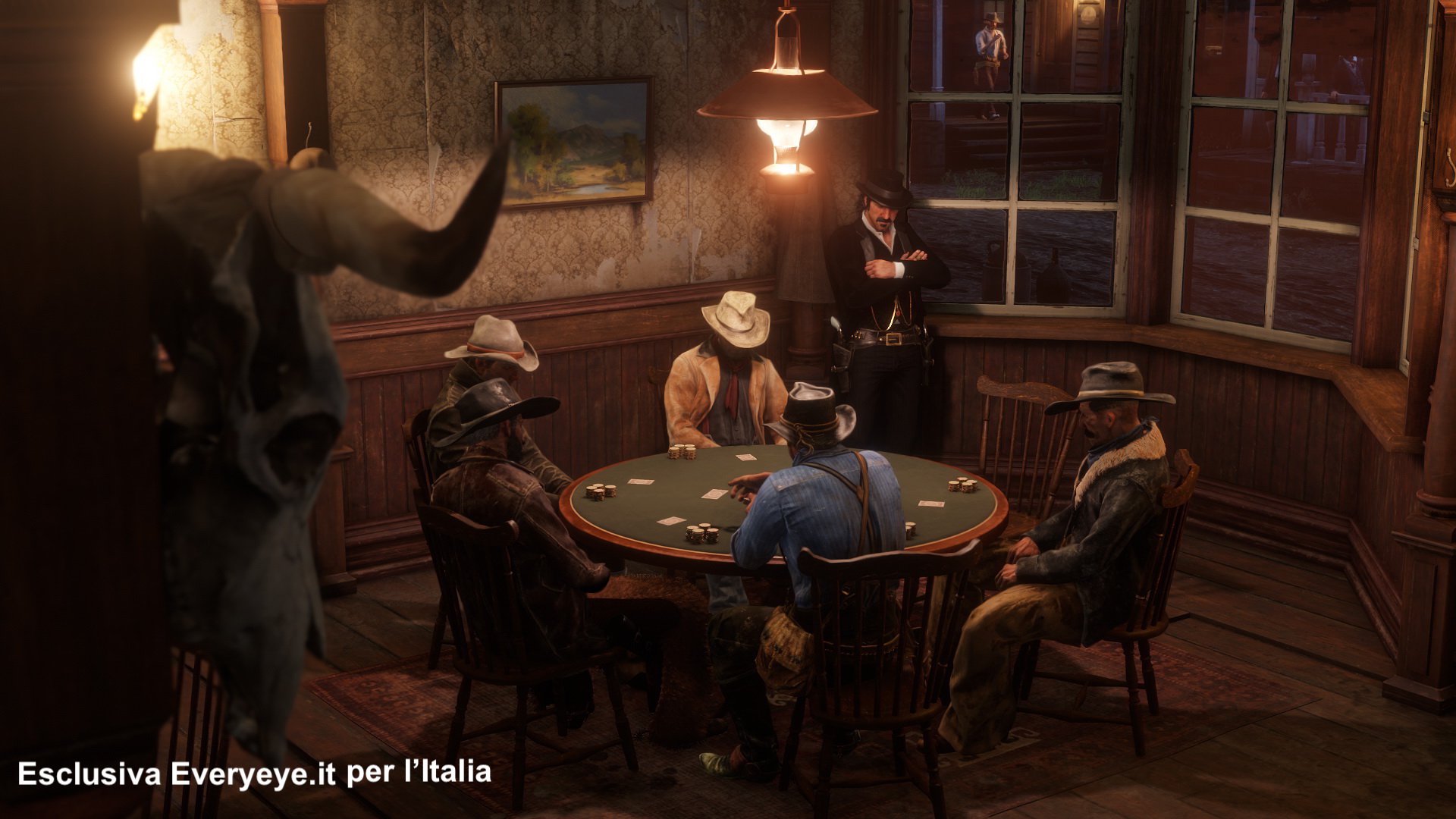 Anyone who’s seen Maverick will know that poker was already a mainstay of riverboats, saloons, and campfires across the Old West way before Red Dead 2 kicks off. The modern game of poker began life in America around the mid-18th century and by 1800 had spread across the Mississippi River region. The use of Texas Hold-‘em rules might be a little anachronistic, as the Texas Legislature dates the game to the early 1900s and Red Dead 2 is set in 1899, but it’s probably close enough.

The most obvious selling point of Red Dead 2’s poker is the mouthfeel. Lots of online poker rooms and videogames poker tables punt for a cowboy theme, but none of those have Rockstar’s attention to detail behind them. The vibe and the texture is just something else. It’s in the period detail of the costumes, the authenticity of the venues, the richness of the voice acting. You can almost smell the cigar smoke wafting out of your console/PC’s vents and taste the whiskey when you swig from your bottle of Mountain Dew.

Dealing hands, pushing chips when you bet, turning over the flop, turn and river all look great. And if you’ve soaked up all the detail you need to then you can skip through things and keep the game moving.

The variety in card design, poker rooms, and opponents all do plenty to keep things interesting. Even the idle background chatter keeps things moving.

One thing that’s a little contentious is the stakes. In the early game, the buy-in is $2.00 and the bigger pots run up to about 40 cents. It’s been argued that higher stakes would make for a more tense and interesting game. The counter-argument, of course, is that the chance to win big early on or lose everything in the later stages could really mess up how the game unfolds. Where you stand depends either on how far you like to push an open world in a game or how tense or mellow you like your poker.

Poker can be played at camp or in Valentine, Tumbleweed, Blackwater or Flat neck Station. It follows a pretty standard Texas Hold-’em format. If you don’t know how to play poker… well, you have the internet at your disposal. Go learn the rules – we’ll wait. 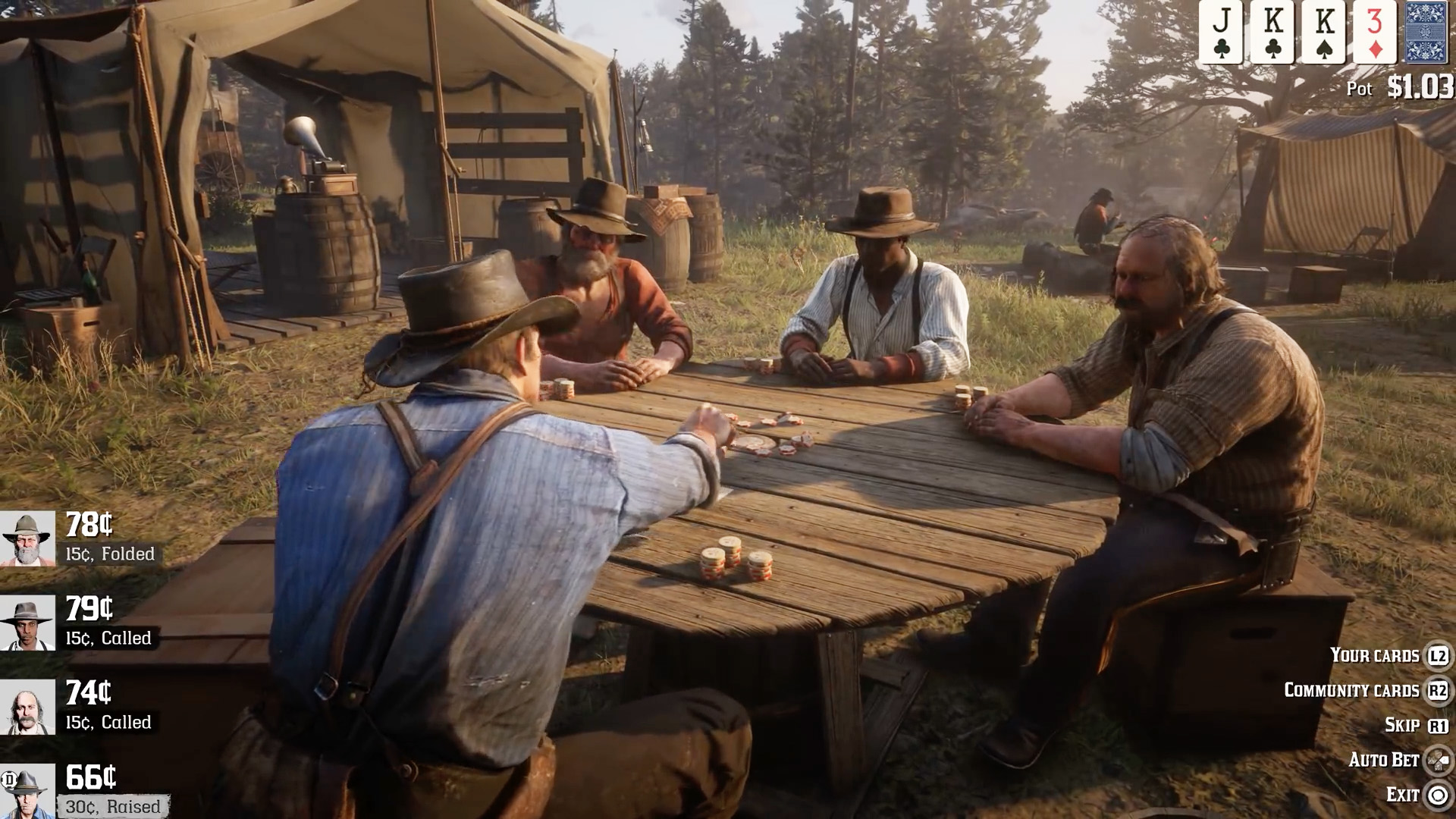 Done? Good. OK, soooooo… how do you win? That’s both tricky and pretty simple. The tricky part is, however good a job Rockstar has done of crafting this immersive game of virtual poker, these are not real humans you’re playing against.

As with lots of elements of an intelligent, deep game like Red Dead Redemption 2, sometimes you risk tricking yourself into thinking it’s a smarter game than it really is. Are you right to think‘OMG, the way that character played that hand was so sophisticated’? Or, perhaps more appropriately, was it just some straightforward algorithmic AI tomfoolery, and because the game is layered and realistic in other areas you convinced yourself a standard AI move was something it wasn’t?

Therein lies the danger of trying to wage psychological war against your in-game opponents. If you treat your fellow players like they are actual fellow players, you might end up wandering down the garden path and making some poor decisions. That said, however, if you have the time and inclination you could get right into it and sit at the table until you’ve learned how the AI plays. It can’t be that difficult to learn the behaviors of a few lines of code, right? So if you’re prepared to bed down for a while you could try to learn the AI’s tells and play style then mop up. As we’ve discussed, the stakes are relatively low so you don’t have a huge amount to lose if you’re in the mood for a longer game.

If you’re not, however, your best bet is to learn the game well, if you don’t already, and do the best that you can be based purely on the hand you find yourself with and the maths as it applies to the cards you’ve seen. No fuss, no second-guessing, just play what’s in front of you. However you choose to play, Red Dead Redemption 2 offers some of the best poker we’ve ever seen in a video game, and it’ll get you about as close to a hand of Texas Hold ‘em in the OldWest as you’re going to get this side of a DeLorean.